TaxAssist Accountants does what it says on the tin - it provides tax, accountancy and advisory services; in this case to small businesses. 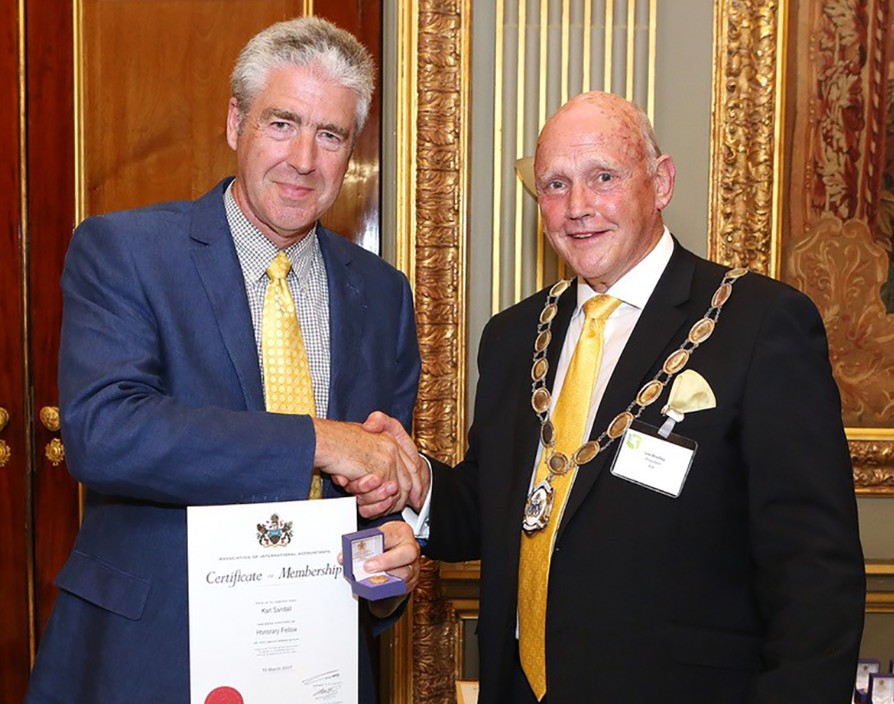 TaxAssist Accountants does what it says on the tin - it provides tax, accountancy and advisory services; in this case to small businesses. Executive Chairman and Group Chief Executive of The TaxAssist Direct Group, Karl Sandall, explains to Elite Franchise the company’s template for growth.

Career-wise, Karl Sandall joined the company in 2000 having spent 26 years working for Midland Bank/HSBC Bank in East Anglia. But when an intriguing opportunity presented itself it proved too tempting for him to turn down.

Such was the case when the qualified Franchise Professional, a Fellow of The Chartered Institute of Bankers and an Honorary Fellow of The Association of International Accountants, was approached by friend and founder of the franchise, John Westgarth, back in 1999.

Westgarth was looking for an experienced business professional to drive the growth of the franchise and while “it was quite a decision to leave the bank after so many years and having reached a senior position”, says Sandall, he relished the opportunity to really make his mark by taking on a new challenge. Supporting small business was also a passion of his.

Being a leading franchisor, a full member of the British Franchise Association (bfa), along with its track record and standing with the banks, TaxAssist Accountants has an invaluable inside track when it comes to attracting would be franchisees.

The initial process all potential new franchisees follow, according to Sandall, “is to speak to us to get a full overview of our offering, read our prospectus and then attend a discovery day so both parties can assess if taking on a franchise is the right decision.”

After this, all successful candidates will be assisted with finance raising and business planning and guided through the due diligence and research process in the build up to attending an initial training course.

“We take on franchisees from a range of ages and backgrounds, but they all have one thing in common - plenty of energy, a friendly persona and a desire to succeed and reach their goals,” says Sandall.

“Fully and part qualified accountants, as well as those from the finance, corporate, banking and insurance world, have all made successful franchisees,” he adds.

While any would be franchisees of course have a choice of where to take their franchising ambitions, Sandall is earnest when it comes to why a franchisee should come knocking on the door of TaxAssist Accountants.

In short, it is the largest network providing tax, accountancy and advisory services to small businesses in the UK and is also the leading franchised accountancy organisation with over 25 years’ experience of operating a substantial network of branded shop front offices that is well recognised and respected.

This creates significant buying power and flexibility to establish a range of support services cost-effectively, as well as huge opportunities around technology and data, according to Sandall.

He adds that TaxAssist Accountants has a highly visible presence with over 360 shops and offices around the UK – a point lost on many accountants who often lack visibility and position themselves behind closed, brass plaqued doors.

“Our unique retail delivery, designed specifically to appeal to the small business market in terms of accessibility and visibility, positively encourages walk in trade and is a breath of fresh air in the accountancy world,” says Sandall.

“We offer the clients of our franchisees fixed fee pricing, paid monthly to spread the cost and speak in clear and jargon free language, proactively looking to save money wherever possible - perfect for our small business clients.”

Factoring in technical and business development support as well, franchisees can build their practices up faster and larger than they would independently.

“We have expanded our operations to Ireland and Australia and have ambitions plans for further international expansion into North America and Europe, post-Brexit.

“We are also part owned by our franchisees, who can buy shares in the franchise and share in our success. This was I believe a global first - a franchisee assisted management buyout from the founder,” says Sandall.

For those looking to franchise their business more generally Sandall has some sound advice.

“Through franchising we knew we could maximise growth potential to the mutual advantage of both TaxAssist Accountants and our franchisees.

“Franchising helps to minimise the risks and pitfalls usually associated with business start-ups, by providing specific guidance for franchisees newly into business, he adds.

His advice is to ensure you know your business inside out and have a thoroughly successful and suitable model for franchisees to follow.

He adds that you should take good advice from specialist advisers who can walk you through the step by step process to establishing a support centre and all that entails.

“As a first port of call, I would advise any business considering franchising to contact the bfa for advice and guidance and introduction to a bfa accredited consultant. It is not for the faint hearted,” says Sandall.

For franchisees who do decide to go to TaxAssist Accountants, having the marketing and promotional tools to grow their business will be key.

Franchisees are provided with a marketing toolkit containing everything they need to run topical campaigns throughout the year.

This is complemented by a business development mentoring programme, comprehensive marketing initiatives, a successful inbound lead generation service and a support team who are on hand to help and advise every step of the way.  TaxAssist Accountants even provides Radio and TV adverts for franchisees to use and of course supports a social media presence for all.

Forming a backdrop though has been periodic global economic headwinds witnessed following the banking crash in 2008, coupled with a changing economic landscape closer to home as the UK negotiates a different type of trading relationship with its counterparts on the Continent.

But Sandall isn’t fazed - not least because TaxAssist Accountants has continued to perform well; its growth having outpaced many larger firms during this period.

For Sandall, the strength of the company’s business model for its franchisees is that there is security in operating with hundreds of small business clients, each with a modest average annual fee in that if some of the clients leave; the risk to the overall business is negligible.

“We have built excellent relationships with the major banks in the UK. This means that we are nationally recognised by the banks that will support potential franchisees with their start up and working capital requirements, subject to their normal lending criteria.” And helped in no small part by brand, scale, breadth of services, local relationships and expertise.

“The banks continue to be impressed with our strong performance, hence their willingness to lend to both new and existing franchisees,” says Sandall.

Despite strong growth historically, Sandall isn’t resting on his laurels and continues to innovate and prepare for the future. “We have invested heavily in our brand, our technology suite and combined with client friendly practices across the country, we feel strongly positioned to be the provider of choice for small businesses and individuals.”

With Brexit now official Sandall’s advice to Boris Johnson, is clear: “Be the Head of Government that is open, transparent, honest and rebuilds respect for politics in the UK. I have always worked to these values and they stand at the heart of building successful relationships and respect.”

If Sandall’s mantra is honesty and respect, what drives him is the satisfaction derived from franchisees achieving their goal of running their businesses.

Equally important, work life balance for staff, franchisees and their staff/their clients is paramount. For example, Sandall recently instigated a well being support service for all staff and provided a Positive News subscription for the team at the Support Centre.

Meanwhile, as a trustee of the bfa’s charitable trust, helping disadvantaged individuals (by age, gender, sexual orientation, disability and so on) to benefit from franchising, Sandall, through the trust, strives to do precisely that.

Another major driver for Sandall is international expansion. And if building a global network of franchisees helping small/local businesses poses a challenge “that motivates us to continue progressing,” he says.

Looking ahead, Sandall has major ambitions/objectives for the company. “We constantly strive to identify, explore and develop all the commercial opportunities available, in order to drive up KPIs (key performance indicators) and maximise returns.”

In addition, the company is looking to continue its high induction rate of new franchisees annually - aiming for 20 this year in the UK alone - as well as further developing its successful international operations in Australia and Ireland. Expansion into Canada and the USA also offers massive opportunities, says Sandall.

Closer to home, TaxAssist Accountants wants to support its UK franchisees to take advantage of the significant move in the sector from compliance to advisory services and use the company’s position as market leader to create new client services and commercial opportunities.

Also on the menu is to increase client leads and roll out more ‘in-house’ services at the Support Centre for franchisees to use (payroll, bookkeeping, accounts, insolvency).

In the end, once further expansion occurs Sandall and TaxAssist Accountants want to be able to say, “The sun never sets on a TaxAssist shop!”