Making the move from equities trading to setting-up a network of health clubs isn’t the most obvious of career progressions. But F45 founder, Rob Deutsch, did it. Rob explains to Elite Franchise why and how. 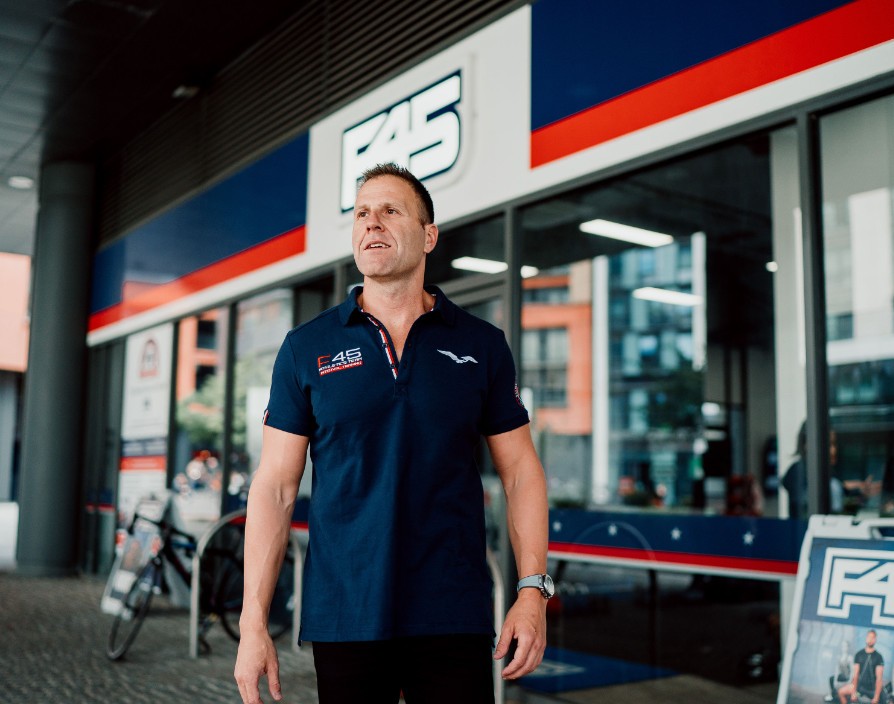 If a Bachelor of Commerce degree from the University of Sydney ticked the necessary boxes for a career in equities trading - one that would last ten years - Rob Deutsch never lost his love for competitive sports, such as rugby and cricket. It was to be a game changer.

‘Slaving away’ - by his own admission - in the finance industry, Deutsch realised that while he had no problem finding the time to exercise alongside his stressful job, many other people did. Eventually, it would lead him to setting-up F45.

“I didn’t realise this at the time, but I can now see how these sports influenced the development of F45, as F45 incorporates a lot of functional movement,” says Deutsch.

Six years after opening his first club in Sydney; five years after F45 began franchising its operations, the company now has over 1,200 studios in 35 countries, with 150,000 members.

Key for Deutsch, when setting up F45, was being able to identify a gap in the health and fitness market between personal training and commercial gyms.

“We set out to create a ‘third way’ - an alternative to what was available in the market at the time,” he says.

“I could see that many gym members were not getting the results or innovation that they wanted from their gym, which led to dissatisfaction and poor attendance,” adding that at the other end of the spectrum there were those who were exercising regularly with a personal trainer and getting the results they wanted. Except this wasn’t an option (on cost grounds) for the majority of the population.

“I wanted to create something that combined the two in a fun environment and featured 3 core elements; motivation, innovation and results for those looking to improve their health and fitness.”

By subsequently positioning F45 as ‘the Apple store within the health and fitness arena’ Deutsch acknowledges the core importance to the business of technology. An F45 studio typically has several screens around the room, displaying everything from the client’s heart rate, through to a looping video demonstrating every exercise in the class.  Hence, a constant visual reference is provided throughout the workout to clients.

“By integrating the interval timer and room layout with a video demonstration of each exercise, our members are guided through their workout, and our trainers are given control and consistency when it comes to workout delivery,” says Deutsch.

“We also currently have our own F45 LionHeart heart-rate technology and are also developing new avatar technology for the studios. Classes are designed to constantly surprise people with inventive new workouts. There are currently over 4,000 exercises in our workout programme, with an additional 250 new ones added seasonally, along with fresh equipment,” he further notes.

“Using the latest research and industry standards in heart rate monitoring and wearable technology,” says Deutsch: “individuals can see exactly how they are performing in each session, as well as being able to set themselves goals for improvement.”

Fuelling the competitive instinct LionHeart ‘rewards’ users via a points system to see how they are performing against their fellow members live in an F45 class.

To further enhance this interactive experience F45 will be adding personalised avatars to members' profiles, which will appear as they enter the studio. The avatars will enhance the gamification software offered by F45 “to enrich the member experience, ensuring users are engaged and allowing instant recognisability of their teammates for fun competition,” according to Deutsch.

Yet identifying a market gap is one thing; the more obvious question is why use F45’s facilities when there are similar services elsewhere. In short, says Deutsch, F45’s USP is that you don’t need to do anything else – just the classes. “It’s functional training at its best, no frills, no fuss, just workouts.”

Also important is that no two classes are ever the same, each class containing different variations of high intensity, circuit-based exercises. “And we know our customers enjoy the excitement of never knowing exactly what they will be doing in their sessions,” he says.

With a further nod to technology - and with a tech team of 100 people - Deutsch says: “We incorporate the latest innovation in patent protected, fitness-based technology for systemised delivery, increased motivation and measurement, as well as post activity workout reporting resulting in an enhanced customer experience.”

However, much has changed in the fitness market over the last decade, given people now place a far greater premium on their health and well being and are more prepared to forego some luxuries elsewhere, such as going out.

“In the past, there were studios and gyms charging $5 a week, where all clients were getting was a rack of dumbbells and barbells. But the only people I could see getting results were those paying personal trainers $80 to $100 a session, so $300 a week.

“This is why I created F45, because I wanted to provide an environment where clients got tons of innovation, motivation, and results in their sessions.”

From a franchising perspective - and beyond the obvious of F45 and would be franchisees being able to work with one another - Deutsch says F45 encourages all potential franchisees to go in and do a class at an F45 studio.

“Once they have tried a class and decided that they want to open a studio, they need to select their territory and find a site - for us pretty much anywhere is a target,” he says.

F45’s sales team are on hand to help franchisees throughout the planning process. Once they’ve found a site and signed contracts they will be invited for a one-week training course in Sydney or Los Angeles, giving them a deeper insight into everything they need to know about F45.

Would be franchisees are also encouraged to speak to other franchisees in order to get feedback and to understand about what to expect.

“It is very important to us that we have happy franchisees in our network, and we want this to be a close-knit community. Franchisees also receive support once the studio is open, with members of the team going in to check everything is running smoothly,” adds Deutsch.

While opening an F45 franchise can be tough, once it happens and any teething problems are ironed out, it becomes addictive. So much so that 40% of franchisees go on to open another studio, Deutsch points out.

Meanwhile, the UK, where growth has been little short of spectacular, hasn’t been left behind either - F45’s UK presence having expanded from just one studio in early 2017, to 30 by the end of 2018 and an expected 100 by end-2019.

Notwithstanding the general health and fitness boom now being seen globally, adding studios in the UK, for example, makes sense, given a huge expansion in functional training - a concept many people are now making a priority in their lives.

Moreover, because F45 is an indoor, premium product, Europe and the UK remain key areas for F45, given the weather doesn’t permit outdoor training for much the year.

The one minor downside seen though is that while London could comfortably support 100 franchises and still have room to grow, securing the right sites has been challenging, according to Deutsch.

Looking ahead, Deutsch’s ambition for F45 to be the largest fitness brand in the world will only be realised if it stays at the forefront of innovation. He adds: “we also need to ensure we’re able to support the enormous growth we’ve experienced.”

For anyone considering making ‘a big move’ Deutsch has some advice. “Make the move; work for yourself, take the plunge, have the confidence to do it.

“Also, make sure that whatever you dive into, you absolutely love it and you’re not just doing it for the money.”