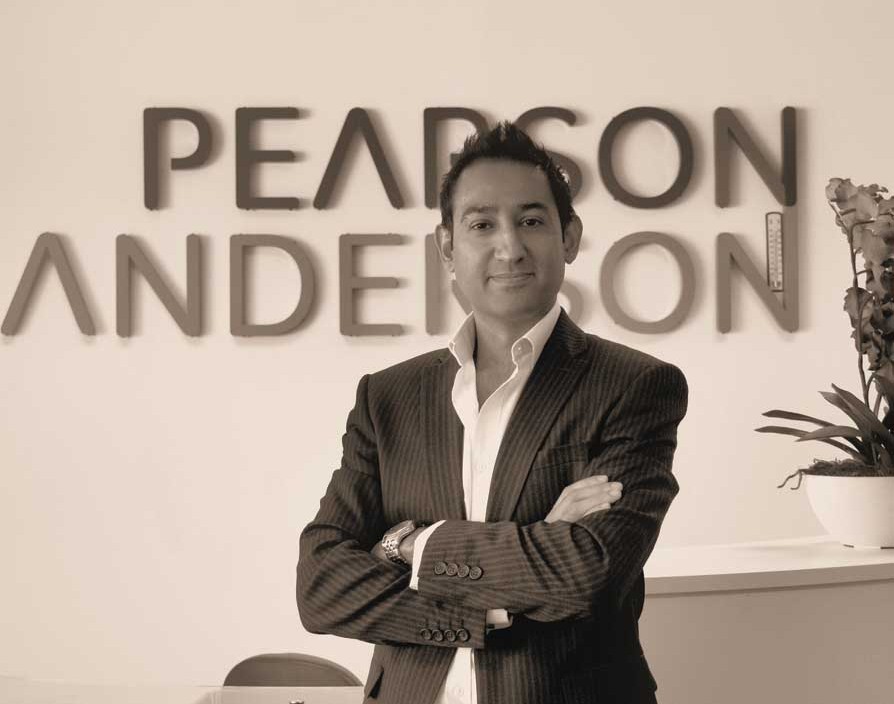 In 2010, Amit Kainth was rushed to the hospital. The stress from seeing his franchise go under, becoming personally bankrupt and attempting to launch a second venture had caught up with him and left him bleeding internally. “I nearly lost my life,” says Kainth. But instead of facing the reaper, he found himself leaving the hospital with a new outlook on life that’s enabled him to grow the recruitment franchise Pearson Anderson to the point where it will be ready to float in 2017. Not only this but it enabled him to find happiness, something that had eluded him since his childhood.

Given that his father ran a company manufacturing knitwear for Marks & Spencer and other international brands, it’s safe to say that when Kainth was growing up inspiration for his future entrepreneurial endeavours was close at hand. “I loved coming with him to work,” he says. But while he picked up a trick or two observing his father in action, Kainth’s formal business education started the day his dad urged him to apply for an undergrad course in accountancy at the University of Sheffield. However, Kainth wasn’t exactly thrilled. “I had no interest in this degree whatsoever but had to do what my father told me,” he says.

Kainth senior would probably have been less than pleased to find out that while he was bankrolling his son’s education, Kainth junior was spending the cash on things other than his required reading lists. “I basically had a three-year-long party,” he says. Given Kainth’s lacklustre interest in his studies, it’s hardly surprising he finished with a third, something his father didn’t take too well. “He told me that I wasn’t welcome home until I went back to Sheffield and got myself a proper degree,” he says.

Swapping accountancy for a financial services postgrad, Kainth graduated with good grades and was hoping to fulfil his childhood dream of working with his father. “But Dad said I couldn’t because my brother was already working with him,” he says. “I told him it was crazy and that I could help grow the business but he wanted me to find a job elsewhere.”

Shaking off the disappointment, Kainth secured a job as a premium assistant at NatWest but while he was happy having found a job, he was less satisfied with the £10,000 a year salary. “My dad gave me more money when I was at uni,” he says. With that in mind, it shouldn’t shock anyone that he swapped employers when HSBC offered him a £30,000 pay cheque and pledged to further educate him. Despite this, Kainth still wasn’t content. “I was making good money but not good enough,” he says.

Inspired by his friends working in franchising, the budding entrepreneur decided to buy a franchise from CNA International, the recruitment agency. While the initial meeting with its CEO Albert Wilde had gone well, Kainth still faced the challenge of raising £50,000 to set up and run the business. Having failed to get a loan from the bank, he asked his parents to spot him the money but once again found himself being rejected by his father, who wanted him to remain in banking. While he had previously obeyed his father, this time Kainth didn’t cave. “It took a few months of persuasion but eventually he gave in,” he says.

Having secured the funding, he set up the business and by supplying candidates to banks and financial institutions he quickly became one of CNA International’s most successful franchisees. “At 25 I was driving a Porsche and at 27 I drove an Aston Martin,” he says. However, even though he was finally earning a lot of money, Kainth still felt something was missing. “I was never happy,” he says. “I was always chasing, chasing, chasing. It was just a rat race.”

And things were about to get worse. When the economy went belly up in 2008 and financial institutions like Lehman Brothers started faltering, suppliers like Kainth were caught in the fallout. In 2009, he went bankrupt. “I lost everything I had built up,” he said. With no income, a newborn baby at home and a mortgage to pay off, Kainth was left with the choice of finding employment elsewhere or starting again from scratch. A chance meeting at a party made him opt for the latter. Speaking with a friend of the family, Kainth asked how the financial downturn had affected him and received the answer “not one bit”. Intrigued, he probed the friend on how his business had escaped the downturn unscathed. “He said he was a pharmacist and that people would always need their medicine,” he says.

The conversation inspired Kainth to launch Pearson Anderson, a recruitment business catering to the pharmacy, nursing and caring sectors, in 2009. The name was inspired by a book by the former Dragons’ Den investor James Caan, the founder of Alexander Mann, the recruitment agency. Following the Dragon’s lead, Kainth chose the name as he liked the sound rather than basing it on a real person.

However, the stress of having gone bankrupt, becoming a father and launching his second enterprise eventually caught up with him, leading to his hospitalisation in 2010. Even though he was eventually allowed to leave, Kainth was left heavily medicated on steroids and only allowed to work for two hours a day. “I was so angry and I wanted answers for why all these bad things had happened,” says Kainth.

Eventually, he found his answers whilst reading the book of Veda, the central scripture of Hinduism. “As I read it, it started to make sense,” says Kainth. Inspired by what he’d found, he devoured the Bible, the Qur’an and every other spiritual text he could lay his hands on. “I realised that, ultimately, they were saying the same thing,” says Kainth.

Distilling his revelation into the book The Gift: The Seven Laws of Success, he set out to provide a gospel for entrepreneurs in pursuit of happiness. Not one to rest on his laurels, he also launched the Amit Kainth Show, a TV program broadcasted for 33 episodes on Star Plus where he interviewed other people who’d had a spiritual awakening. A second season is planned to start filming in the US next year.

Despite his poor health in 2010, Kainth managed to lead Pearson Anderson from making its first £1m to closing in on a £10m turnover. Last year, the company made a second big move by inadvertently signing up its first franchisee. It started with Jon Smith, chairman at CNA International, asking if Kainth could help train some of his company’s new franchisees. However, as the onboarding of the new franchise owners was underway, one of them developed buyer’s regret. “I felt guilty because he had already spent the money, so I told him I’d give him a Pearson Anderson franchise for free,” says Kainth.

That’s how, almost by accident, the company launched its first franchise in Reddish in 2015. “In one year, he was able to turn over more than a quarter of a million,” he says. “When we saw that the model worked, we decided to expand it.” New franchisees are able to tap into the company’s network of clients and get support from other franchisees, while the head-office team is ready to help them with everything from background checks to how to grow their business. However, this isn’t just a one-way street – in return, Kainth expects them to work hard. “You can’t come in and expect this to be an easy ride,” he says.

Having organically grown to five franchisees in one year, Pearson Anderson is now a member of the bfa and is looking to expand the network even further. “It would be good to have about 30 franchisees,” he says. Given that the business is also looking to IPO in 2017, it’s safe to say that six years after his near-death experience, Kainth is well on his way to achieving entrepreneurial success once again. “But this time I’m happier, at peace and more content,” he concludes.

As web editor and resident Viking, Johansson ensures Elite Franchise is filled with engaging and eclectic entrepreneurial stories. While one of our most prolific franchise writers, he has sharpened his editorial teeth by writing about entertainment and fitness. Follow him on Twitter at @EricJohanssonLJ to catch up with his stream of consciousness.