The phrase ‘all that glitters is not gold’ contains a kernel of truth. But the founder of gold-plating business and franchise Goldgenie, Laban Roomes, is very much the genuine article 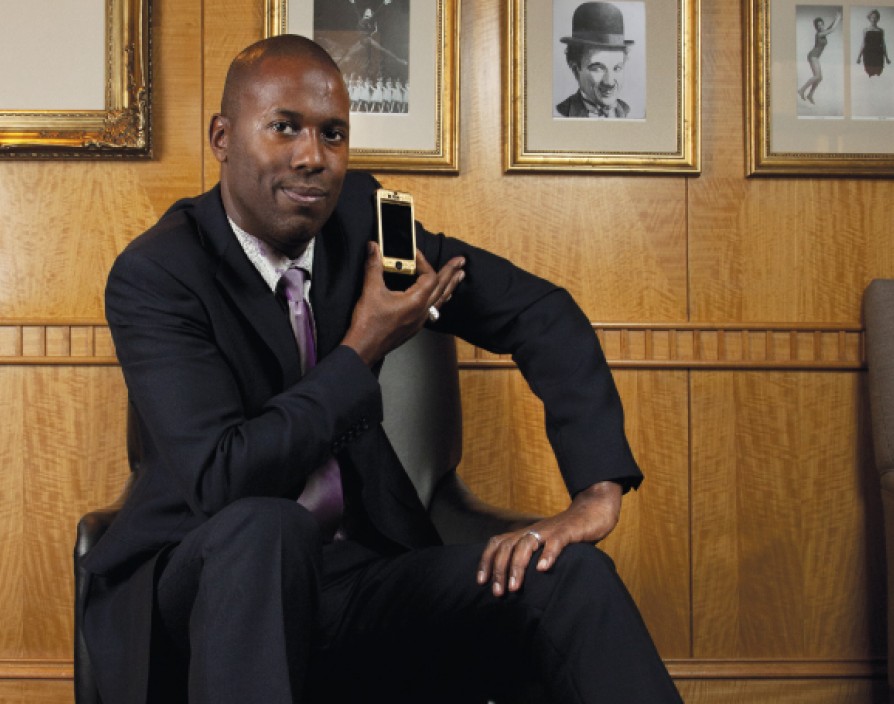 The streets certainly haven’t always been paved with gold for Goldgenie founder Laban Roomes. “I grew up in abject poverty,” he says. “My parents separated when I was around four years of age and my mum struggled to keep a roof over our heads.” Roomes’ mother wrestled with mental health problems and, while she earned a decent wage, it was still difficult for her to make ends meet. “I made a conscious decision that I was going to make my own money,” Roomes adds.

Many a young entrepreneur has cut their teeth trimming their neighbours’ hedges and Roomes is no exception. However, even then, the Leyton-born entrepreneur wasn’t content with sitting at the head of a small- time operation. “I had a team of people working for me,” says Roomes. “And I actually started to make more money than my mother who worked at the local factory.” He was, at that time, just 11 years old.

By the time he was 18, Roomes was exporting cars to Jamaica and making ten times what he was paying for them. Ever the dutiful son, Roomes used his success to support his mother. “At the age of 19, I paid off the home that we lived in,” he says. “If there’s been a high point of my life, it was paying off my mum’s mortgage.”

However, the real test of the entrepreneur was just around the corner. After spending some time travelling to various countries, he went to Jamaica to visit family and help out with that side of his import/export business. Unfortunately, he was greeted by something of a shock.

“The business that I had trusted with my in-laws had been completely sold,” he explains. And, in addition to discovering that his business had been ruined, his mother suffered a real dip in her mental health. Roomes returned with £80 in his pocket to find all the locks had been changed on the house.

For most people, finding themselves homeless wouldn’t appear to be the ideal time to start a business. But Roomes wasn’t easily beaten. He recalled something he’d seen on his travels in America that had piqued his curiosity: a portable gold-plating machine. “I drew a picture of this gold-plating system, found someone to make it for me, borrowed money from an ex-girlfriend and got the prototype made,” he says. “I literally knocked on people’s doors and asked them if they had items they wanted gold-plated.”

His first sale was an order of ten nipple rings for Unusual Skin, a piercing store in Tottenham, London. He made £10 for the whole order.

Going from nipple rings to a deal with Lexus may seem like a huge leap but Roomes was nothing if not persistent. Finding that the car manufacturer wouldn’t respond to his letters or calls, he decided to take direct action, heading to a dealership that once stood in Barbican and insisting they let him demo the product. “They dared me to gold-plate an emblem on the car without messing up the paintwork,” he says. “And I did so, to their amazement.” From the off, seven dealerships signed on the dotted line.

However, Goldgenie’s big ticket item isn’t Lexus emblems: it’s mobile phones. The idea initially came from a purchaser of one of the company’s business options; it took off so quickly that Roomes was soon picking up the overflow. Then, when the idea’s originator was forced to retire for personal reasons, the phones became a mainstay of Goldgenie’s business.

At this stage, Roomes was still running a humble operation out of a tent in his back garden. So it came as something of a shock in 2007 when he got a call from the organisers of American television industry awards the Emmys. “They said, ‘We’ve got 55 phones that we need gold-plating’,” he recalls. “They were going to Helen Mirren, Denzel Washington – literally every single person who’d been nominated for an Emmy Award.”

And, of course, that wasn’t his only brush with celebrity during 2007: the entrepreneur was also invited to appear on Dragons’ Den. Three times.

When he was first asked to appear, he went to the studio and, after demonstrating what he did, the show was eager to book him in.

They gave him a date and time and arranged a limo. But in the intervening time, doubts had begun to creep in, largely thanks to the negative advice of some of the people around him. “When they came down, I said, ‘Look, I’ve made a terrible mistake. I’m not going on the programme. I’m very sorry,’” says Roomes.

This happened a second time and, had it not been for an acquaintance putting him forward for the show, Goldgenie’s path might have been very different. The show’s producers were understandably wary but something had changed for the entrepreneur.

One of Roomes closest friends, Mark Mackenzie, had tragically died. “He was a very talented, good-looking guy,” says Roomes. “He could sing, he could act, he could model. But he was always too scared to step up his game.” The fact that he passed away without ever being able to make the most of his talents hit Roomes deeply and he vowed fear wouldn’t hold him back. When he was offered another shot at going on the show, he took the chance.

As experiences go, it was pretty dramatic. Roomes remembers standing at the bottom of the Den’s stairs and another contestant asking him why he seemed so calm and collected. He began to explain about the death of his friend. “As I was telling the story I started to cry a river of tears,” he says. “The clock was counting down, ‘59, 58, 57…’ and I was crying like a baby at the bottom of the stairs.”

Roomes managed to pull himself together just in time and used the energy of his story to win over the investors. “I went into all of that spiel and they just felt it,” he says. “I came alive and Mark Mackenzie was one of the triggers.” His story and business won over James Caan, who invested, and Goldgenie’s profile exploded. “Excuse the pun, but it says in the Bible, ‘A good name is better than silver and gold’,” says Roomes. “And I think just having James Caan’s name attached to the business was incredible.” Roomes has since bought back all of Caan’s shares – meaning he still retains 100% of the enterprise’s share holdings – but the pair remain in close contact.

One of the lynchpins of Goldgenie’s growth has been its franchising system. The selling of master franchises has helped spread the brand around the world, enabling people to run Goldgenie in their own country. However, perhaps more interesting is the Goldgenie business option. “They can set up a company in their own name and become a Goldgenie-certified professional,” Roomes explains. This entitles them to act as resellers as well as gold-plating for themselves.

It isn’t just about boosting brand profile though. Most important for Roomes is knowing he is offering people opportunities to build their own success stories. “I started this business literally from a friend’s floor, because of what happened in Jamaica and losing everything,” he says. Which is why Goldgenie is in the process of setting up its own mentoring and incubator scheme, dubbed ‘Online Dragons’. Packaged with access to web design, marketing resources and space in the Goldgenie offices, the intention is to help other entrepreneurs with the same passion as Roomes himself.

More than just a case of a glittering finish on a well-thumbed product, Goldgenie is an example of 24-carat entrepreneurialism. And it’s helping to galvanise a whole new generation of budding business ventures.